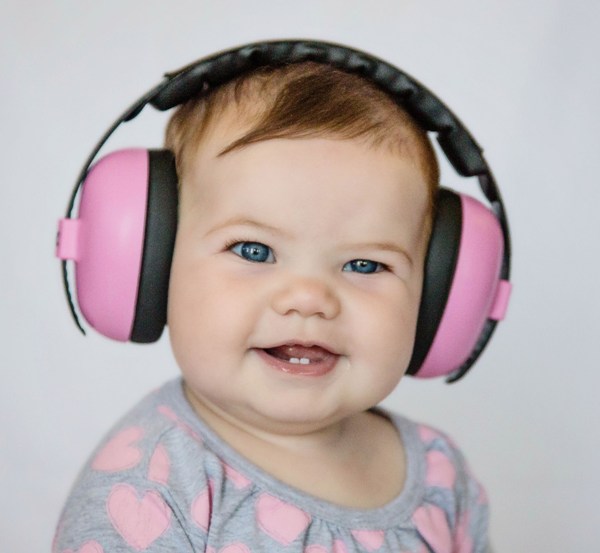 The importance of protecting children’s hearing in noisy situations with earmuffs is a recent phenomenon – so recent, that we’ve come across several myths and misconceptions about using earmuffs for children.

We’re going to debunk those myths, get rid of the fake news and tell you how it really is!

Myth 1: “Earmuffs will deafen my child!”

Relax – the designers of Banz earmuffs know that if you needed to get your child’s attention urgently and they couldn’t hear you, it would be dangerous – and putting babies and children into a ‘cone of silence’ would be upsetting, especially to very young ones.

As total noise cancelling is impractical, Banz earmuffs reduce loud, damaging noise to a safe level – and let softer sounds, such as speech, be heard. After all, the Banz Carewear motto is: “Sensitive Care. Sensible Choice”!

Myth 2: “It’s OK to wear earmuffs over a beanie or hoodie”

We often see pictures of little ones wearing their snuggly woolly hats underneath their earmuffs. We know you mean well – kids have got to stay warm, right? – but we recommend adjusting your child’s earmuffs to fit correctly before putting them on over the ears, THEN putting their hat over the top.

Why? Because a hat underneath the earmuffs means the muffs can’t seal properly over the ears, leaving your child in danger of ‘sound leak’. As the earmuffs can’t do their job properly, the wearer is in danger of being exposed to much greater levels of loud sound. Parents are lulled into a false sense of security, thinking their child’s hearing is safe – but it’s not.

David Welch, head of the Audiology Department at the University of Auckland, says: ” Make sure babies are not wearing hats when you put the earmuffs on. If the cushion cannot seal on the side of the head, the sound can get through and it is amazing how much gets in. It is a real problem we encounter often in adults who work in cold environments and wear woollen hats to keep warm, then don earmuffs on top – the sound just cuts through wool as though it wasn’t there.”

Myth 3: “You don’t need special earmuffs for babies and kids, my work ones will do”

It’s sad but true – some people believe that adult earmuffs will fit children and still give proper sound protection. That’s like expecting a baby or child to wear Dad’s work boots and not fall over!

Children, and especially babies, have different needs from adults when it comes to hearing protection. The obvious one is size – as well as being incredibly heavy for little heads, adult earmuffs can’t seal properly around children’s ears – and the protection factor is gone.

Also, babies also have softer head than adults, with the fontanelles or ‘soft spots’ yet to close. Adult-size earmuffs put an adult-force grip over the head which can be dangerous, especially for children under two years.

Banz earmuffs, both the Mini size for under 2 years and the Protective size for 2-10+ years, are especially designed to fit correctly – and they will keep up with your child’s growth, as they are adjustable. Importantly, the headband on the Mini Muffs is specially made with a light tension, so the earmuffs won’t put the squeeze on soft baby heads!

Myth 4: “Any hearing protection will do for the kids – it’s all the same”

Since earmuffs were invented back in 1873 (for warmth, not for noise reduction), there have been riffs on the basic design – but only one, the classic ‘earcups connected by an over-the-head band’ has stood the test of time.

There are other takes on the concept of the headband, using different soft and stretchy materials. However, these easily slip forward onto a baby’s forehead and risk the loss of protection as the earcups move around. Also, due to the bad fit, they can be difficult to keep on your baby. The specially-designed headband on Banz earmuffs won’t slip – and there’s a lot more technology in a padded Banz headband to keep soft baby heads safe than there is in a piece of stretchy material!

A word on using earplugs for babies and small children: Experts recommend that nothing smaller than an elbow goes into a child’s ear canal, for good reason – trying to fish out an earplug, and especially ear putty, from a super-small baby ear canal is dangerous. Also, earplugs are a choking hazard for small children.

Myth 5: “The kids don’t wear their earmuffs that often, they don’t need cleaning”

It’s easy – and recommended for hygiene – to clean your Banz earmuffs after each wear. Simply wipe over the set with a cloth dampened by mild soap and water.

Myth 6: “My baby has grown out of his Mini Muffs, but he isn’t two yet, so I can’t put him in the bigger ‘muffs”

The age recommendation on Banz earmuffs is just that, a recommendation or guide. Every child is different and some will need to update their earmuffs to the larger Protective Earmuffs size a bit earlier than others. Once the earcups on the sliding adjustment of your child’s Mini Muffs are sitting at the bottom of the band, it’s time to consider upsizing for the near future – their age doesn’t matter.

Now you know what’s what when it comes to baby and children’s earmuffs you’ll use Banz Carewear earmuffs – supplied by the experts in children’s safety gear – with confidence!

Red traffic light? No worries! At Banz Carewear we

Can't get over the amount of cool this little guy

Cooper's loving his JBanz shades bought from our l

See what our friends at @babyonthemovenelson have

BACK IN STOCK! All polarised Beachcomber sunnies a

We love seeing how our little customers pair their

SALE! Get 15% off all Oasis Sunscreen with the cod

Need a cotton sunhat that really shields your litt

🎉Levi's ready to party in his Silver Banz earmu

BACK IN STOCK! Reversible sunhats have just arrive

Taking the kids to the movies? Many movies - even

Out and about in style - and they know it!⁠ JBan

New Year's Day walks at the beach - what's your fa

We are taking and sending your orders as usual under the Red traffic light setting! Dismiss